Commentary and analysis on the
law of insurance coverage 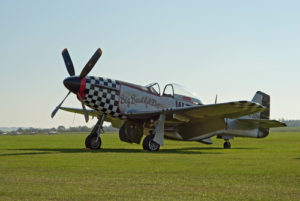 A very recent case out of the United States Court of Appeals for the Tenth Circuit caught my eye because it involves an airplane accident and insurance coverage.  As a private pilot, I spend a fair amount of my leisure time reading about plane crashes.  Most pilots do this; not because we’re morbidly interested in tragedy but because we seek to avoid making the same mistakes others have made.

The parties in the Tenth Circuit case were an insurance company and the estate of a student pilot who had been killed during an instructional flight in a World War II fighter plane, a P51-D Mustang.

The storied P51 is among the coolest airplanes ever built.  To prove the truth of that statement, here’s a picture of the Mustang’s cockpit:

The Mustang was manufactured as a single-seat, high-performance, fighter.  Some purchasers of this vintage airplane have had it modified, adding a rear seat so that an instructor (or a passenger) can fly in it.  Charles Early made such a modification to his P51.  Early and his flight instructor, Michael Schlarb, died in a crash shortly after takeoff in the plane on the Fourth of July 2014.  The question in the case U.S. Specialty Ins. Co. v. Estate of John Charles Early, Jr. (get a copy here) was whether Early or Schlarb was “operating” the aircraft at the time it went down.  There was no direct evidence to support an answer to that question.  No one knows whether it was Early or Schlarb who was at the controls on the fatal flight.

U.S. Specialty insured the plane and filed a declaratory judgment action seeking a ruling that it didn’t cover any potential claims arising from the crash.  Its policy said that the “aircraft must be operated in flight” only by Michael Schlarb.  At the time of the accident, Early was sitting in the forward seat and Schlarb was in the rear.  The district court (that is, the lower court) judge heard expert testimony about the fateful flight and concluded that Early must have been “operating” the plane at the time of the crash.  Accordingly, the court granted the carrier’s motion and entered an order that there was no coverage under its policy.  The Tenth Circuit affirmed on appeal.

All of the instrumentation shown in the picture above is located in the front seat of the Mustang.  For the modification in Early’s plane, the back seat was equipped only with a control stick, rudder pedals, flap controls, and a throttle.  The policy did not define the term “operated,” so the district court looked the word up in a dictionary and applied the following definition: “[To] control the functioning (of a machine, process, or system).”  Both parties agreed to this definition.  The Tenth Circuit concluded that Early was operating the aircraft at the time of the crash “because he was the only pilot with access to all of the controls and instruments needed ‘to control the functioning’ of the Mustang.”

Every student pilot has experienced some variation of the following.  One day, shortly before the student steers the plane out onto the runway for takeoff, her instructor pulls some small sticky objects out of his flight bag (in my case, it was a package of post-it notes) and uses them to cover up the instruments on the control panel.  He then says, “Let’s go flying.”  Here are the instruments and controls that are left to the now-nervous student pilot: The control stick (or yoke, depending on the aircraft type), the rudder pedals, the flap controls, and the throttle.  This is the exact same equipment that was located in the rear seat of Early’s Mustang.  The idea is to teach pilots that flying during VFR — or visual flight rules (as opposed to flying in clouds) — is all about looking outside the airplane.  The first time it happens, it’s something of an exhilarating revelation for the student pilot to take off, fly in the pattern around the airport, and then get the plane safely back on the ground without once looking at the instrument panel.

Full disclosure: I have never flown in a P51-D Mustang.  I cannot say for certain whether it is possible to fly a Mustang using only the controls I would need to fly my Cessna 172.  But I would be willing to bet a significant amount of money (significant to me, anyway) that a CFI (Certified Flight Instructor) who had been “checked out” in Early’s Mustang could get that plane off the ground, around the pattern, and back on the ground all by himself from the back seat.

One reason for my confidence in this opinion has to do with the Federal Aviation Administration’s Pilot-In-Command, or PIC, rules.  Under Federal Aviation Regulations, the PIC is “the person responsible for the safe operation of the flight.”  FAR 1.1, 91.3.  There can only be one PIC at any one time on a flight.  What is more, a student pilot cannot act as PIC unless he or she is the sole occupant of the aircraft while training for a pilot certificate and has a current solo flight endorsement. Since Schlarb was sitting in the back seat on this flight and he had a student in the front, Schlarb was the PIC, “responsible for the safe operation of the flight.”  While it is certainly possible that Schlarb was violating the regulations on account of his inability to comply with his PIC responsibilities, it is unlikely.

The carrier in the Early case had an expert who submitted an affidavit that provided “a checklist of all operations required to carry out a complete flight in the Mustang” and that stated: “The pilot in the forward seat has the sole ability to conduct the vast majority of those operations.”  That may well be perfectly true.  A “complete flight” likely involves climbing to altitude and cruise speed, retracting the landing gear, adjusting the trim control, and attending to myriad other functions required for high-speed straight-and-level flight.  But there was nothing in the record of the Tenth Circuit’s opinion to suggest that this was the kind of flight Early and Schlarb had planned or were taking.

A great many instructional flights early in a student’s flying carrier involve nothing more than flying around the pattern, practicing takeoffs and landings.  A key question that the opinion doesn’t answer is: “What kind of flight was this going to be?”  Were the pilots going to make a practice flight around the pattern or were they actually going to go somewhere?  If this were simply a flight around the pattern, during which Schlarb was going to do all of the flying to demonstrate various takeoff and landing techniques to Early — which would not be at all unusual for an instructional flight — Schlarb could very well have been sitting in the back seat and still have been in compliance with FAA regulations concerning his PIC responsibilities.

In my experience, you only need control of a yoke, the rudder, the flaps, and the throttle to accomplish an instructional flight confined to the airport’s traffic pattern.

In fact, the Estate argued as much in its brief on appeal: “Schlarb had access to the same controls necessary for the takeoff (throttle, rudder pedals and yoke).”  Unfortunately, according to the Tenth Circuit opinion, this statement was not supported by anything in the record.  In the absence of such evidence, the courts had little choice but to accept as true the (potentially dubious or misleading) opinions of the carrier’s experts that the pilot needed to be sitting up front to “operate” this aircraft.  Since it was very likely the carrier’s burden to prove that Early, and not Schlarb, was operating the plane at the time of the crash, the Estate simply needed to create a fact issue about the actual ability of Schlarb to have “operated” the plane from the back seat in order to get past the carrier’s motion and to have the case submitted to a jury — at which point, the Estate would have had a fighting chance to win coverage.

It’s perhaps a little too easy for me to be a back-seat pilot here, with only the Tenth Circuit’s opinion as a guide, but it appears from the decision that the parties (particularly the policyholder) may have failed to raise or answer some key questions about this flight and may have neglected to provide adequate and compelling expert opinion to the court to assist in the task at hand.  When courts have to rely on experts to enlighten them about subjects beyond the ken of an average person, the parties need to make sure that the judge has all the information necessary to reach the right decision.  It is a task that can sometimes produce great injustice and lead to the conclusion that we have the worst kind of legal system.  Except for all the others.

If you’d like us to notify you whenever there is a new post on The Insurance Recovery Journal, subscribing will make that happen. There’s no charge and we won’t use your email address for any purpose other than to send the notifications.